PNG does deal with ‘devil’ it knows over gold mine

Aerial view of the Porgera gold mine. Photo: Zijin Mining

Papua New Guinea’s government has done a deal with “the devil” to reopen a large gold mine in the country’s Highlands region.

With an economy in contraction due to the pandemic, the PNG government has reached an agreement with Canada-based company Barrick Gold on plans to reopen the Porgera mine.

The Enga province mine had been in operation for 30 years until a year ago when it closed a after PNG’s government denied Barrick and its joint venture partner in Barrick Niugini Ltd, Zijin Mining of China, a renewed mining lease.

Barrick never wanted to leave PNG because it saw Porgera as a long-life, high-margin asset with accessible reserves that can produce half a million ounces over a decade.

But the joint venture had encountered deep opposition from Porgera landowners and residents over nagging issues related to the mine, including environmental and social problems, and minimal economic benefits for the local community. Also, despite the mine being one of the world’s top producing gold mining operations, PNG’s government felt the country was not getting enough of a cut of the profits.

The James Marape-led government suggested PNG would operate the mine itself. But with a lack of capital, and a health crisis on its hands, the prospects of a return to mining seemed remote.

In the interim, thousands of people lost jobs, while the national and Enga provincial governments lost sorely needed revenue.

PNG’s government decided to be pragmatic, according to its Mining Minister Johnson Tuke at the bubbly agreement signing ceremony in Port Moresby.

“Though Barrick has taken us to court, we work in harmony. It’s better to work with the devil you know than the devil that you don’t know,” he said to hearty laughter from representatives of Barrick in attendance.

After months of difficult negotiations, a deal has been forged between the resource-rich Pacific nation and the forces of global capital, giving PNG majority ownership of the mine.

Under the agreement, ownership of the mine will transfer to a new joint venture, which will be 51 percent-owned by PNG and 49 percent by Barrick Niugini Limited, the mine’s operator.

The agreement also gives PNG stakeholders – government and landowners – 53 percent of the economic benefits from the mine.

The prime minister said state negotiatiors secured the best deal they could for PNG.

“Barrick and BNL (Barrick Niugini Ltd) will carry a cost of almost 65 percent in refinancing the reopening of the mine, and we are contributing at 36 percent to restart up the mine, going forward. A gold mine is capital intensive every time, going forward.”

“Instead of us going to the bank, borrowing at 6 percent or 7 percent, Barrick will be advancing us the 36 percent (of costs) that we’re supposed to pay at zero percent interest.” 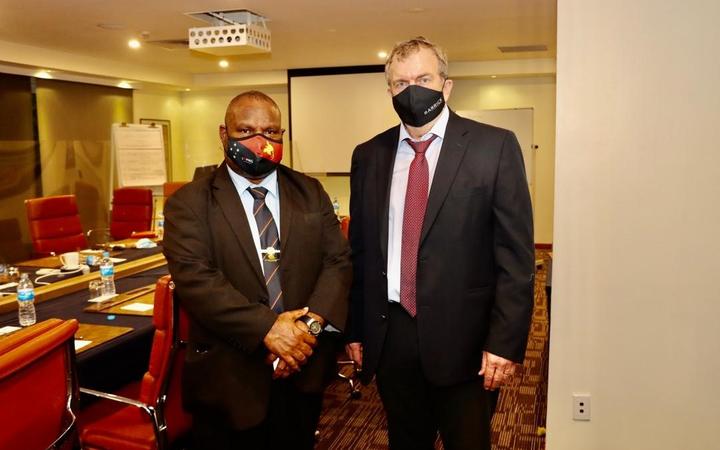 For Barrick and Zijin, reopening the mine as soon as possible is the priority.

With PNG’s recent rainy season having taken a toll on the open pit at Porgera, he said it would take at least seven months to get the mine operational again.

“So it’s in our interest to work hard to get the mine to where it’s producing revenue again,” Bristow explained, adding that they hoped to get production to a level even exceeding its previous levels.

Despite the enthusiasm of Barrick and PNG’s government, landowner issues cast a shadow over the plan to reopen the Porgera gold mine.

Phillip Marokon of the Akali Tange Association of landowners in Porgera said they were not involved in the agreement.

“Barrick never seemed to pursue our issue – the state and Barrick,” he said.

“So these outstanding issues are still pending, but they never inform us in advance of what is happening, and the agreement has already been signed.”

As well as matters up for landowner approval, the government still has to address the establishment of development commitments to PNG, Enga and Porgera under the venture.

Tuke said the government’s next focus, before the reopening of the mine, was addressing concerns within a Porgera landowner forum. It knows that landowner opposition could yet prove obstructive to the chances of the mine reopening this year.

“As affected landowners, we really don’t want them (the miners) to come until and when they sort our issues out,” Marokon explained.

But PNG’s elected leaders are putting on an upbeat face about the agreement as a positive distraction from the worrying Covid-19 surge being experienced around the country.

The Governor of Enga, Sir Peter Ipatas, said his province was happy that the framework agreement had been reached after what he called a “long journey”.

Sir Peter has been Enga’s governor for the past 23 years, and knows how much of an impact the mine has had.

“Despite all the clashes that Mr Bristow and our team had, it’s all for the benefit of our people,” Sir Peter said at the signing ceremony.

“It’s not personal, but at the end of the day we had to get somebody who will deliver for us and work with the devil I know… and that’s Barrick.”

It’s unclear if Barrick will increase remedial efforts to address the legacy of rape and violence by its security contractors and other social problems on the mine lease area, or the mine’s pattern of environmental destruction.

But Mark Bristow cited a phrase used in Chinese foreign policy when opening up about his company’s strategy at Porgera.

“People in the industry always talk about ‘win win’. But what we talk is the win win concept and put it into an agreement. And, you know when I joined Barrick, the one thing I said, we have an objective of achieving is we want to be the most valued mining company in the world. That means we want to be acceptable for future generations.”

The agreement also includes an option for PNG to acquire the whole mine at fair market value after 10 years.