Young Korotiki ruggers who are part of the junior rugby program in Nanukuloa, Ra. Picture: SUPPLIED

The Nanukuloa Rugby Union (NRU) has embarked on a junior development program with the aim to teach youngsters in the village the basics of rugby.

This task has been taken up by Moape Laweni, the man behind the resurgence of Nanukuloa Rugby Union in 2015. Nanukuloa has been one of the standout teams in the Fiji Rugby Union Vodafone Vanua Championship.

The team reached the semi-finals on three occasions and featured in the final in the past six years.

Leweni, who is the NRU executive said the COVID-19 pandemic brought about a lot of ideas for the need of a junior development program to be implemented for the betterment of the sport in their area. 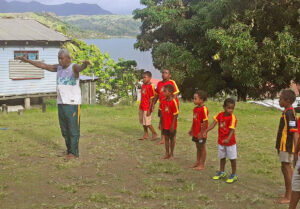 The young ruggers warm up for their training in Nanukuloa, Ra. Picture SUPPLIED

He said one such idea was the upbringing of its junior players in the sport at an early age.

Laweni said they had begun working with their future stars at grassroots level.

“With the blessing of the union, I have taken up the task to work with our junior players who are mostly primary school students,” he said.

“Once the sporting restrictions were lifted, we immediately went to work. We began our first training session on October 13 and now train once every Wednesday.

“The players have been taught the basics of the game. There are 20 players who are part of the group and the response has been great.”

Nanukuloa’s best ever finish in the Vanua Championship was reaching the final in 2015 eventually going down to Navosa at Lawaqa Park in Sigatoka.

Leweni revealed that Nanukuloa’s recent performance had not gone unnoticed with support flowing in from abroad as well.

We are very grateful to Rob Carwood, a former rugby player and a steward at Drummoyne Dirty Reds and Holmby Rugby in Sydney who has come on board to support the young Korotiki ruggers.”