NARENDRA Prasad hid in a drain and cried as he heard his daughter Saleshni Devi scream for help as she was attacked by her husband with a cane knife.

“I was so frightened, I could not even move,” the 67-year-old farmer of Labasa told The Fiji Times.

“I was standing behind our house when I saw my son-in-law walk towards us with the cane knife and I thought of approaching him.

“But if I approached him, he could have done something to me.

“I was so scared, I just lay down in the drain to hide from him.

“This is the worst day of my life because I was helpless and I never imagined losing my daughter in such a terrible way.”

Police spokeswoman Ana Naisoro says the suspect, who police believe parted with his wife two months ago, has been arrested.

She said before committing the attack at Navoalevu, the suspect turned off the lights by tampering with the meter box.

“When the victim came outside to check, he grabbed her and allegedly struck her several times with a cane knife,” she said.

“The victim managed to run into the house but was chased by the suspect where he continued to attack the victim and later fled the scene.

“He was arrested at his home in Daku, Wainikoro, and is now in police custody.”

Ms Lata’s children said domestic violence was the norm in their home. 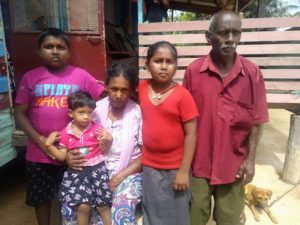 L-R Sabneet Lal, Shanaya, and Rikasnsha have lost their mum in a domestic violence incident. Their maternal grandparents Narendra and Sahba Prasad are pictured here with them. Picture: SERAFINA SILAITOGA

Nine-year-old Rikashna Lal claimed she always intervened and tried to protect her mother whenever her father became abusive.

“Every time my father wants to punch my mother, I will run in between them and yell at my father to stop and he always walks out of the house,” the Year 4 student said.

“I started doing this ever since I was eight years old and sometimes I would hug my mother to protect her from my dad.

“I will miss her so much. I wasn’t here when everything happened, I was at a religious function.”

The deceased’s 11-year-old son, Sabneet Lal, said his grandmother Sabha Wati had to hide his two-year-old sister under her long skirt when his dad entered the house with a cane knife in his hand.

“I was staying with my dad and just came to my mum on Tuesday (this week) to spend some time with her,” he said.

“But now she’s gone and I can only pray that God will continue to guide me and my sisters and my grandparents too because they are old.”