Discovering Fiji: Kubulau – Strange animals and the priest who created them

All violent cyclones since the 1950s have never been able to destroy Nadivakarua’s giraffe. Picture: Jone Kalouniviti/Facebook

IN the wake of Tropical Cyclone Yasa’s devastating assault in Bua, the villagers of Nadivakarua in the district of Kubulau were left wondering about what to eat in the months ahead.

With wind gusts reaching a maximum speed of 260km per hour, everything that the men of the village had planted to feed the family with and earns a livelihood from was virtually lost.

Now they’ve rebuilt their farms and reshaped their lives.

The village chief, Ratu Peni Sigare, is anxious worried about his people’s source of livelihood.

Despite the many disturbances made to Nadivakarua’s order, a few things have remained unscathed by even the strongest storm since TC Winston, among them a concrete giraffe. 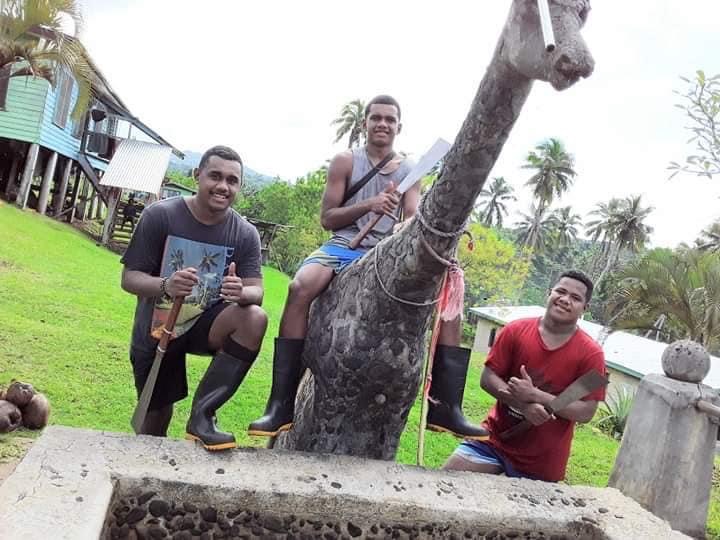 Youths of Nadivakarua have fun with their village giraffe, constructed in the 1950s byFr Coquereau. Picture: JONE KALOUNIVITI/FACEBOOK

The 60-plus-year-old statue continues to tower over a small rectangular village pool – its mouth slightly ajar and spewing out water.

The giraffe with no name was one of four cement animals that were synonymous with landmark water projects in Bua, in particular the district of Kubulau, before Fiji gained independence in 1970.

While Nadivakarua had a giraffe, in the village of Natokalau, accessed by a rugged drive through palm-shaded foreshore, a faithful cow was immortalised in concrete. Both animal statues remain today.

In Nasasaivua, a concrete ape with a glistening back and a mouth revealing a set of leering teeth were once the village’s equivalent of the world’s “seven wonders”.

For a companion, the ape had a four-feet-high toad, also cast in concrete.

But today, the amphibian and the ape have disappeared from Nasasaivua, removed a few years back by zealous Christians who thought they were elements of witchery and brought bad luck.

If the two animals were not destroyed, Bua would now have a quartet of cemented animals with beautiful stories behind them. They would all become historical monuments in the future. 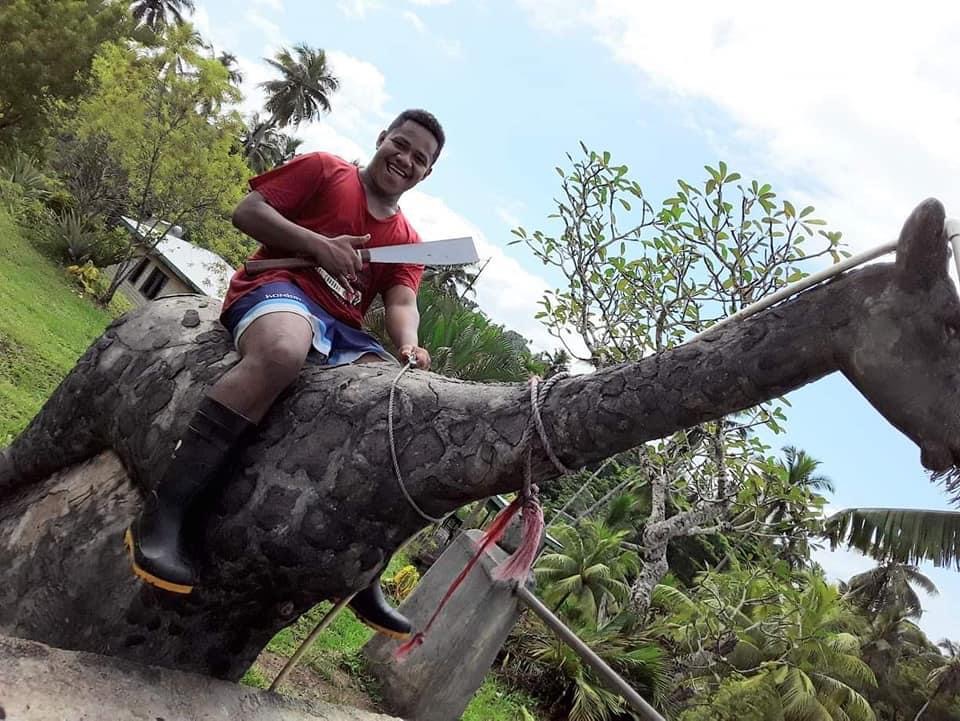 Nasasaivua was notorious during TC Winston in 2016.

A baby made headlines when he was placed inside an esky cooler to keep him safe while monster storms battered the village. During TC Yasa though, the village was kept virtually safe.

If you engage in a boating trip and hug the coast of Kubulau for a short distance from Nasasaivua, you will come to a place tucked in a bay within a bay.

From here, after a short walk through swaying coconuts trees, you will find yourself in Nadivakarua, a pleasant hillside village. Standing in the centre of the village just below the chief’s fine bure is a youthful giraffe about six-feet tall. 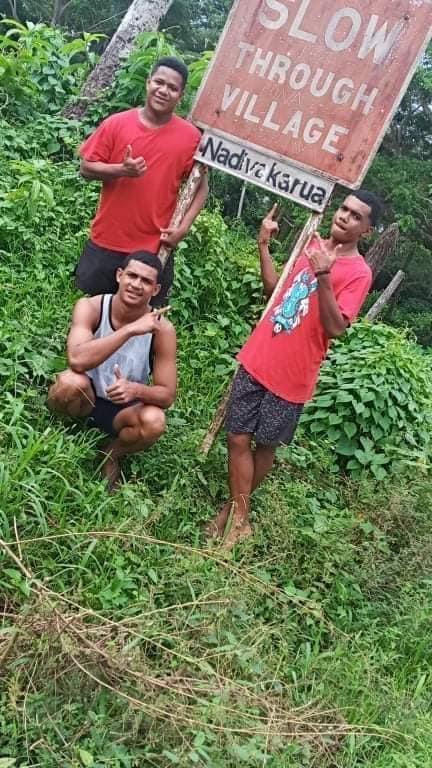 But who made these cement creatures?

“According to stories passed down to me, our village giraffe was built in 1956,” Ratu Peni shared with The Sunday Times team during an interview at Nadivakarua, a few days after TC Yasa.

Back in the 1950s, the water that spouted from the giraffe came from an overflow in the village’s water reserves.

That water system was built by the men of the village under the direction of a Marist priest.

A galvanised metal pipe was fitted into the animal’s mouth, giving it a very unique appeal.

However, because the original pipe is now blocked due to solidified water impurities it is now replaced with polyvinyl chloride piping.

“When I was small, the pool used to be the village’s melting spot,” Ratu Peni continued, “women would gather there to wash and children would have a dip.”

The giraffe and pool was at their busiest during New Year. Villagers used the pool to wet each other during the tradition of “vakatawase”.

It was based on a radio broadcast by Philip Matthews in which he described his trip to see Kubulau’s concrete animals.

“And on the trip I made, it was here that we found the author of the sculpture – Father Paul Coquereau – clad in gumboots and working in clothes; looking the part not of a priest not of an artist but of a foreman of works,” Matthews noted.

“By now you’ll realise that there is a complex story behind the intriguing collection of concrete figures on the Vanua Levu coast.”

“What I have described so far is merely the lighter touch of what is a serious story. I like to call the concrete menageries – not very originally– the wit of Father Coquereau.”

The story of Nadivakarua’s giraffe is intertwined with the sharp rise in copra prices after WWII.

At the time local growers “had more money than experience in wise spending”.

As a result, in 1951, Ratu Sir Lala Sukuna, then Secretary for Fijian Affairs, introduced a bill to tax Fijian copra producers and use the savings for initiatives that would benefit Fijians who were part of the tax scheme.

The copra-producing parts of Kubulau became part of this initiative.

Their “savings” were later used to develop village water schemes.

The bill was debated at length and after a number of amendments, it was passed into the laws of the Colony as the Fijian Development Fund Ordinance.

Ratu Sukuna’s objective was to allow indigenous Fijians to emerge into the business circle from the “state of sole economic reliance on subsistence crops”.

The idea was to provide owners of the fund with clean and bright compounds, with houses built of more permanent materials, with good sufficient water supplies.

“And secondly…with the agreement of the Director of Medical Services, to see to it that these people towards the construction of durable subsidiary  infant-welfare wards in which babies, after discharge from maternity hospitals, can be looked after,” Mr Matthews added.

A levy of $10 was made on all Fijian copra and this money was credited to the account of the grower – in some cases an individual, in some a group of producers, such as a village.

As a result of the scheme, payments amounted to over ¾ million and withdrawals, to finance projects approved by the board reached nearly ¼ million pounds.

In Nasasaivua, the concrete ape that Father Coquereau built presided over a large concrete water storage tank. The flag that is held with its paw moved up and down to indicate the volume of water stored in the tank.

“Back in those days, this construction was not only creative but crafty too. The villages in Kubulau that Father Coquereau assisted and built concrete animals in never had water shortages,” Ratu Peni said.

The fact that the water came through the mouth of a toad or a giraffe added merely a “fascinating embellishment to an important and valued scheme”.

Many letters were written to the Fijian Affairs Board expressing the indebtedness of depositors to Father Coquereau for his labour in the installation of these water and “guidance gave gratuitously”.

The priest did not limit his skills to projects in Kubulau. In other parts of Fiji, he left behind a legacy of firsts too.

In the book titled “Story of Holy Cross” author John Crispin, said Father Coquereau had arrived in Wairiki, Taveuni in 1934 and remained there until 1945. During that time he baptised 760 people and was a parish priest before and during WWII. 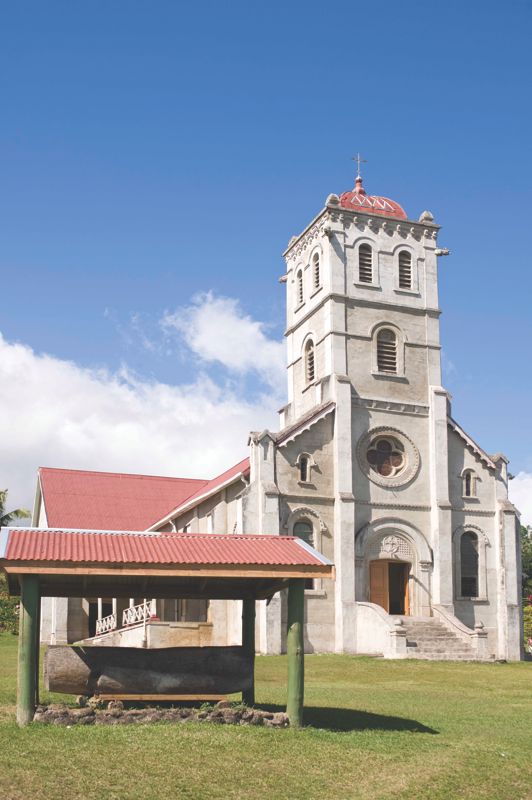 “Father Coquereau is well remembered in various parts of Fiji for his practical skills, particularly in installing water supplies in several mission stations and villages before ever the government got involved in this,” Mr Crispin said.

He set up two projects in Wairiki. The first of these was the island’s first hydroelectricity plant.

He bought a small three-kilowatt hydroelectricity plant from France and installed it in the garage below the church.

The second project he would be remembered for was a soap factory within the parish compound.

During WWII, it was difficult to buy soap and copra was plentiful so Father Coquereau bought caustic soda and he made bars of soap.

When The Sunday Times team last visited Taveuni in 2018, one student that Father Coquereau taught at Wairki in the 1940s was still living and shared his thoughts of the priest. 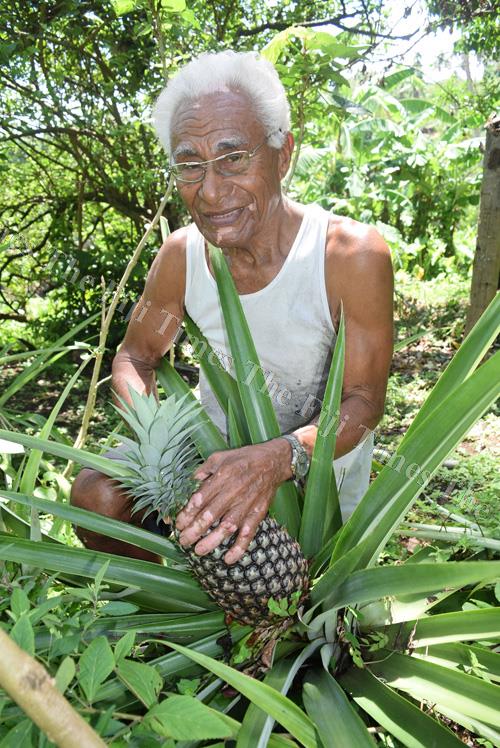 Jese Koroinacika in 2018 …a proud student of Fr Coquereau at Wairiki in the 1940s. Picture: FILE

“He was a very creative priest, very skilful and good with hands,” said Jese Koroinacika, then 85 years old, “ he made soap that was delivered throughout Fiji.”

During the war, Father Coquereau supplied soap to all the mission stations in Fiji.

The hydro-electricity plan ran until the early 1960s when it broke down.

A new plant was replaced in the 1980s. But lack of maintenance and the increased size of Wairiki mission station ended the days of hydroelectricity in Wairiki. 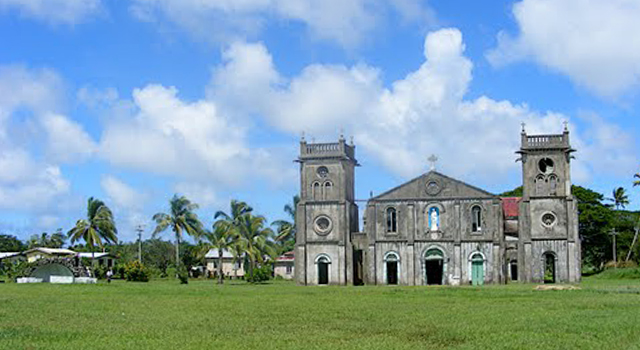 Wherever he was, the stories were the same.

He was not only a man who possessed spirituality he also had with him an intrinsic innovative ability.

He may be gone forever, but in a few parishes and rural areas around Fiji, his name will be a constant reminder that he worked closely with the people he taught and led.